The King of the Lake

Posted on September 8, 2020 by Theodora Goss

The King of the Lake
by Theodora Goss

It was time for the Great Blue Heron’s toilette:
mid-afternoon, when light fell over the lake
sideways and the sun, still golden, shone
with the intensity of midsummer although autumn,
announced by the first few orange leaves, had come.
Sprinkled over the water were some lily pads
and two brown ducks, escorted by a drake.

He fluffed his feathers, gray and blue, like a cloak
of storm clouds, then stretched out his neck
and combed the feathers there
with one clawed foot, looking briefly ridiculous.
I did not know a Great Blue Heron could look
so ridiculous, as though he had washed his hair,
shaken it into a tangled halo,
and was combing it out, perched
on a dead branch sticking out of the water,
where on other days turtles slept in the sunlight.
Suddenly he hunched himself again
into himself, growing elegant and inscrutable.
I felt as though I had seen
a nineteenth-century gentleman
with his cravat untied.

Then a fish sent ripples across the water,
disturbing the leaves of the forest under the water.
By the time I looked up, he appeared as noble
as a marble emblem of serenity. And yet,
I felt as though I had seen something. I don’t know what,
but something important. Perhaps the other side
of Nature, disheveled and careless, without the splendor
of her sunsets or snow-capped mountains, sitting
at a table in her negligée, playing solitaire.
Here was her king, like a character
from a fairy tale, who had briefly put down
his crown and revealed himself. 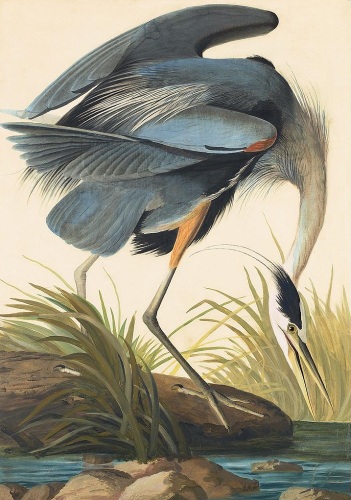 The image is a Great Blue Heron by John James Audabon.

2 Responses to The King of the Lake