The Tooth
by Theodora Goss

In summer, I chipped a tooth
on something — a seed, a small piece
of grit, a tiny stone
in a bag of green beans.
The dentist fixed it with that stuff
dentists use to fix teeth.
In winter I chipped it again
in exactly the same place,
biting into a dried apricot that was supposed
to have been pitted, but wasn’t.
Which is no big deal, really.
The dentist can fix it again.

Except that it reminds me
of my grandmother, who by the end of her life
had lost all her teeth, Soviet era dentistry
not having been, let us say, ideal.
There were cavities in the worker’s paradise.
She chewed soft food with dentures,
living principally on chocolate
that she hid under her pillow
in case it might be stolen by, I don’t know, soldiers?
A habit she learned during two world wars.

That was the year she left us,
going wherever they go, the ones
who leave us irrevocably.

When I wonder where that is,
my tooth, the one that has been chipped
twice now, says, don’t worry.
You’ll know soon enough. 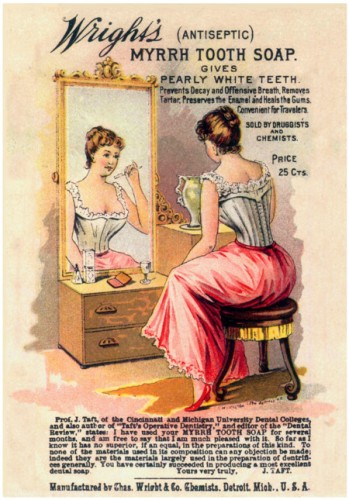 (The image is a Victorian advertisement for tooth soap, which I assume is an early form of our modern toothpaste.)

All Night Long
by Theodora Goss

All night long the snow falls down,
covering the buildings of the ancient town —
the central square, the benches in the park,
the lamps that remain shining in the dark,
the silent fountain, the abandoned trees
whose leaves have fallen, whose birds have flown.
Slowly, slowly the snow falls down
over the streets of the ancient town,
which resembles a woman in her wedding gown.

The moon shines through its clouds and sees
battered walls and broken electrical towers,
a river once spanned by a fallen bridge
flowing through darkened neighborhoods
between banks as white as an empty page —
while snow covers what lies written beneath
in the frozen churn of boots on mud.
The cathedral looks like a wedding cake.
The snow continues to fall for hours.

An empty page, a linen cloth,
a wedding veil, a moth whose wings
are dusted with icing sugar, like sweets
that children dream of on Christmas eve —
the snow resembles all of these things.
Beneath snow and moonlight, the ancient town
stays awake all night, holding its breath,
waiting. What can it do but wait,
while generals send bombs and the children sleep? 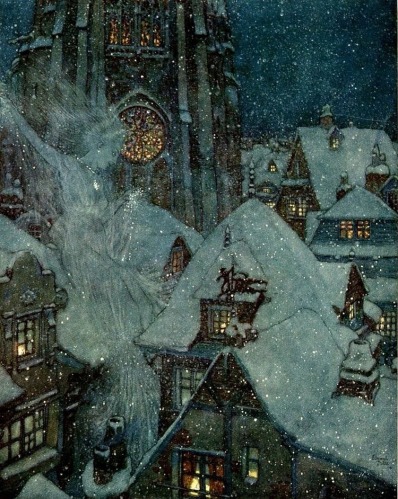 (The image is an illustration for “The Snow Queen” by Edmund Dulac.)

In the Vitrine
by Theodora Goss

I gave you myself, and you set me
on the shelf where you put all your precious things,
your father’s watch, your mother’s wedding and engagement rings,
the figurines of Harlequin and Columbine
from some famous porcelain manufacturer in, probably, Spain?
Framed ancestral photographs, looking so solemn,
and an ashtray inscribed with your initials
in honor of something or other. What, I’m not certain.

There I was, in the vitrine, important enough to keep
in such a prominent place. But somehow, I became dusty,
faded by sunlight, like the embroidered fan your grandmother
carried for her presentation at court. I began to feel
shoddy, cheap, like a gimcrack prize you had won
at a fair called life. No longer myself,
no longer something I could give freely, confidently,
except perhaps to a second-hand shop.

I hopped down from the shelf,
dusted myself off. Oh, I was not the same as I had been
when I was bright and shining, when I had known my own name.
And yet there I was, not made of porcelain
that would crack or break — no, I was more resilient than that.
I scooted past the sleeping cat and headed out the door . . .
a little worse for lack of wear,
but not broken. 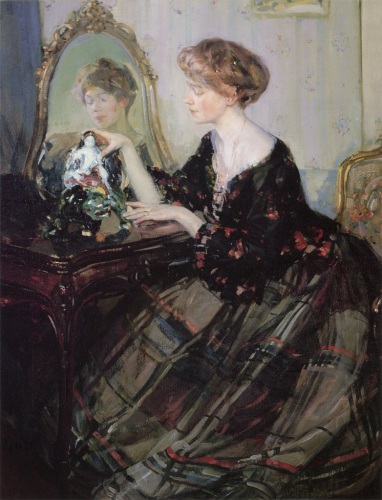 (The image is The Chinese Statuette by Richard Emil Miller.)

The Photographer
by Theodora Goss

The photographer bought a hut
on the estate of the viscounts of Almansa
from the doctor, the grandson of the old viscount,
a hut that had for centuries
been for the shepherds and their sheep.

He swept it out, painting the walls and doors —
white walls, doors and shutters
in shades of green.

There he would take pictures
of the light as it fell across
the walls, an arrangement of dried flowers
in a green glass vase,
a row of ceramic pots, the persimmons
in the small orchard, still hanging on bare branches
under nets to keep away the birds.

We watched him, the photographer,
a brown, wrinkled man with a black camera
looking and looking and looking,
pointing, sometimes winking at us children.
I wondered, then, what he saw
in doors and shadows,
in wedges of light, or a set of linen curtains,
in leaves littering the courtyard.

(The image is Corfu: Lights and Shadows by John Singer Sargent.)

The Thief
by Theodora Goss

It happened on a Tuesday.
She stole away
from her respectable self, the self
with duties, responsibilities.
Slouching, she slunk like a common criminal
through back streets, to a café
she had seen the week before and asked,
in a hushed voice, for a pastry, a cup of coffee.
She sat on a velvet chair by a small, circular table
with a marble top, a rose in a crystal vase.

And there,
while the other customers were looking elsewhere,
she stole an hour.
She sat, brazenly licking cream
from a silver-plated spoon
all by herself, for no reason whatsoever
while at home
the laundry was looking for her, the trash bins
were wondering where she had gone.
When she got back to the waiting, impatient house,
where everything clamored for her attention,
she checked her handbag. Yes, there it was:
the stolen hour, still bright and shining.
In the hall mirror, she could see
her stolen self, only a little disheveled.
And she noticed, as she hung up her coat
again, that the old tabby cat
who wandered at will through a hidden kingdom
of back gardens, returning, sometimes, with feathers
in his mouth, gave her, for the first time, a look
of sly understanding.

(The image is Reading at a Café by Jane Peterson.)

What Galatea Said
by Theodora Goss

You made me,
breast and thigh, the curves
of my belly. Out of marble
you selected yourself
from a quarry in the mountains
outside the city of Carrara, the color
of bleached linen or the surface
of the full moon. You carved
the lines of my jaw, the lenses
of my eyes, the waves
of my hair tumbling
down down down
to the tops of my buttocks.

And now,
unsatisfied, you want
to amend your own creation.
My dear Pygmalion,
having begged the implacable
Aphrodite for my life,
marble to woman, I’m afraid
you will have to live
with imperfection.

(The image is Pygmalion and Galatea by Ernest Normand.)

It was spring. All the birds were building their nests
and I had no nest.
They were settling down and finding a place to rest
and I had no place
to rest, or to lay my head and dream a while.
So I envied them: the robins, so domestic,
bringing insects to their fledglings in the branches
of the maple tree, through whose green leaves I could see
the flash of orange breasts,
the blackbirds and grackles proclaiming their presence, loudly
iridescent, and the mallards on the pond, the males
with their green-banded necks, the females
dressed in brown, like Quakers. They sat on the water
as though upon a green, reedy mattress,
comfortably bobbing up and down,
and I wished more than anything for a pillow
or a blanket to wrap around myself,
as soft as duck feathers, or even a coverlet made of leaves
so I could pull the green of it over myself,
to sleep and sleep and sleep
and dream of flying.

(The image is American Robin by John James Audubon.)