The Bear’s Wife
by Theodora Goss

I went to the bear’s house
reluctantly: my father would have a pension
for his old age, my mother a pantry filled
with food for winter. My brothers would go to school,
my little sister — all she wanted, she said,
was a dolly of her very own. I went
dutifully. Like a good daughter.

In the bear’s house there were carpets with dim, rich colors
from Isfahan, and mahogany furniture,
and brocade curtains. More bedrooms than I could count,
a ballroom in which I was the only dancer,
a library filled with books. And electric lights!
But I chose a candle to see him by — the bear,
my husband. The wax dripped.

He woke, reproaching me, and it was gone —
house, carpets, furniture, curtains, books,
even the emptiness of empty rooms.
I was alone in the forest.

If I returned to my father’s house, they would greet me
with cakes and wine. My mother would draw me aside.
This is what comes of marrying a bear, she would say,
but now it’s over. You can live a normal life,
marry again, have children that are not bears,
become a respectable woman.

There was the path back to my father’s house.
Instead I turned toward the pathless forest,
knowing already what the choice entailed:
walking up glass mountains in iron shoes,
riding winds to the corners of the earth,
answering ogres’ riddles. And at the end
the bear, my husband, whom I barely knew.
And yet I walked into the dangerous trees,
knowing it was my life, knowing I chose it
over safety, maybe over sanity. Because it was mine,
because it was life. 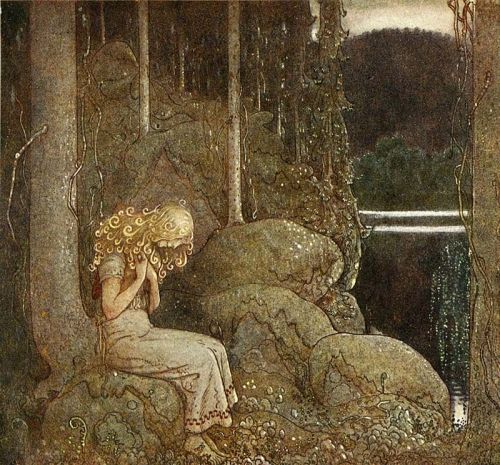 (The image is an illustration by John Bauer.)