Where did Philomela, raped and mute,
find the threads to weave a tapestry,
imprisoned as she was in a tower,
in the forest of Thrace,
you ask me.

And I answer, the trees
bent their branches to give her
green leaves, from which she pulled
filaments. The birds flying above let fall
red and brown and orange feathers,
which she spun into strong fibers.
Blue came from the sky reflected in a pool,
wound on a spool by her clever fingers.
Clouds descended so she could have white
like tufts of wool. For black,
thin strands of darkness without stars
were donated by night, and the day
would have given all her yellow away
if Philomela had asked.
The moon contributed a skein
of her own silver hair, and purple twilight
wove itself into the tapestry
to set Philomela free
from her prison, her silence.
You could say they collaborated
to tell her story.

When the tapestry had been woven,
thread by thread, night said:
she has been silenced, this young
woman, Procne’s sister. But together
we have given her a tongue. 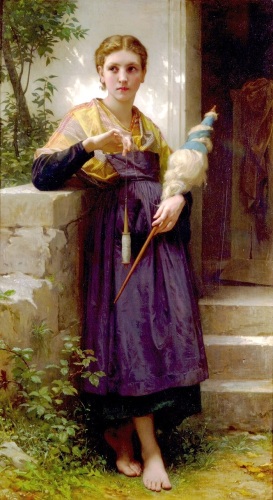 (The painting is The Spinner by William-Adolphe Bouguereau.)