The Snowdrops
by Theodora Goss

I’m bringing you a message:

That the snowdrops are worth listening to,
and if you listen carefully, you can hear them,
but you must get down on your knees, head low
to the ground, as though praying.

They say that spring is more important
than whatever else you were doing, which you thought
was so important.

They say: Look, we’re growing all around you
out of last year’s leaf litter, as you should be growing,
silently, almost imperceptibly, from what you were
into a newer version of yourself.

They say: It’s time. If you weren’t sure whether
it was time, well then it is.

They say: Be joyful, as we are. And you can see
that they are, in their fresh radiance.

They are making you a promise. Although
it may snow again (after all, it’s only February),
although right now the wind is turning your cheeks
red and chapping your hands, although there is nothing
else poking out of the ground except the hellebores,
which are the flowers of winter,

spring is coming. If you pay attention, you can feel it
in the ground, and in yourself. Paying attention
to its arrival is a kind of prayer. 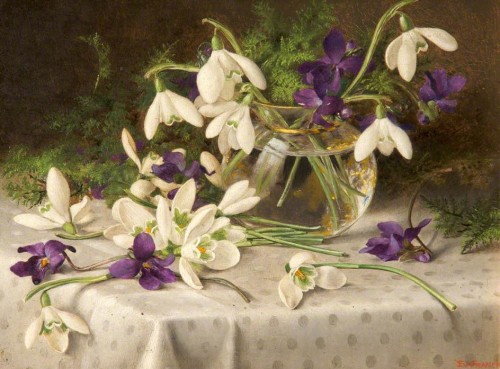 (The painting is Snowdrops and Violets by Eva Francis.)

4 Responses to The Snowdrops