Diamonds and Toads
by Theodora Goss

This fairy tale is a metaphor.

Because it really would be just as uncomfortable
to have diamonds coming out of your mouth as toads:
one hard, sharp, like a mouthful of glass. The other
soft, squishy, making you
disgusted with yourself, because . . . toads!
Ugh. At least the diamonds are valuable,
glittering in the palm of your hand,
although their edges leave your throat aching,
your mouth sore.

The diamonds knock against your teeth.
The toads make your tongue feel coated
as though a snail had crawled across it,
leaving a trail.

Once there were two girls, sisters.
One, whose name was Tabitha,
woke up in a good mood. The sun was shining.
She did not mind the sheep
bleating in the meadow,
although some days she wished
they could be eaten by wolves
so it would be quiet, just for a moment.
Her dress was hanging in the closet,
freshly pressed (her sister had done the ironing
yesterday). Her hair was curling naturally,
rather than tangling in the brush, as usual.
So she sang as she went to the well.
There she met an old woman
who was secretly a witch. (Isn’t that how
it always goes?) The woman asked for water
and Tabitha gave it to her,
drawing up the pulley
with a smile and a “Lovely day, isn’t it?”
She’s the one who got the diamonds.

Her sister, Dolores,
woke up the next day with a headache.
It was raining, and rainy days always did that to her.
They also made her hair frizzy.
Her only clean dress
lay crumpled in the laundry basket, still damp
because Tabitha had forgotten to hang it on the clothesline.
(We can’t blame her. She was dealing
with the diamond problem, still lying down
with a hot compress on her throat.)
That morning, the breakfast porridge burned
and the cat had left a half-chewed mouse in the parlor.
Ugh. So Dolores went to the well
in a foul mood
and told the woman to draw up the water herself.
She got the toads.

I told you this tale is a metaphor.
They used the diamonds
to buy more dresses, a carpet for the parlor,
a phonograph, some sturdy shoes,
and books. Quite a lot of books.
Tabitha was able to finish her degree
in library science. Eventually
a prince proposed to Tabitha, but she didn’t want
to become his main source of income, better than taxes,
which parliament wouldn’t let him raise, so she told him
she wasn’t interested.

It was the toads that kept the garden
free of damaging insects: cutworms, leafrollers,
loopers, hornworms, rootminers, the ubiquitous beetles
that chew through rose leaves, leaving them
looking like window panes.
Dolores grew the finest cabbages, tomatoes,
aubergines. Her orchard was the only one
not devastated by a new apple borer.
Her roses were perfection.
From their hips she made a syrup for sore throats,
for which Tabitha was grateful.
She patented it and created a thriving business.

Eventually Dolores married a gentleman
with a very large garden. She’s Lady Dolores, now.
Tabitha became a librarian,
so she rarely has to talk:
she can shush without triggering the diamonds.
Still, she wears a spectacular brooch
pinned to her sweater, because after all, why not?

Here is the moral: there are circumstances
in which toads are as useful as diamonds.
Or it may be, try not to get out of bed
grumpy, especially when there are witches
around. Or always be nice to old women,
because you never know.
Or maybe Tabitha and Dolores are really
one woman, and some days what comes out of our mouths
is diamonds, and other days, toads.
Which is better? I don’t know.
The moral of a fairy tale
is as difficult to figure out as what to do
about cutworms and beetles, or blackspot
on the rose leaves. 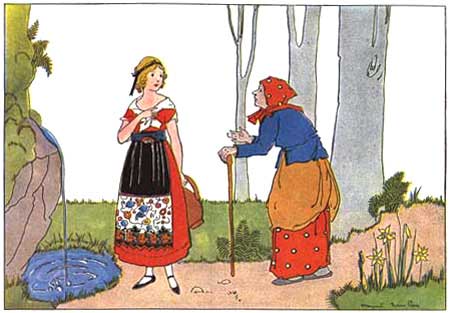 (The illustration is by Margaret Evans Price.)

4 Responses to Diamonds and Toads