Once, there was a woman
who did not want to get married.
Instead, she wanted to write.
What! said her father.
What! Why would you want such a thing?
said her mother, who had been married young
in the cathedral, wearing a long lace veil,
and borne seven children.
So the woman said
I will marry God.
Her parents nodded, because that
made sense: what woman
would not want such a husband?

Behind the stone walls of the convent,
she sits on her wooden chair,
beside her wooden bed, with its thin mattress,
under a crucifix with her husband
hanging on it,
and dips her pen into the ink
as though performing
a holy ritual. 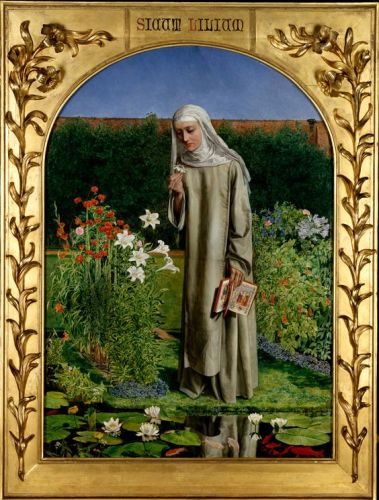 (The painting is Convent Thoughts by Charles Allston Collins. I wrote this poem after hearing about the seventeenth-century Mexican poet Sor Juana Inés de la Cruz, who decided to enter a convent instead of getting married so she could continue writing and studying scholarly works. I started wondering how many women made a similar choice, in eras when options for women were limited to marriage or the church.)